In the heart of a park of 25 acres, the Château of Coislin, privatized in its entirety can accommodate 22 people (15 adults and 7 children) in 9 bedrooms, fully refurbished with style for an unparalleled comfort. A reception room for 50 people, adjoining the château, will host your dinners, receptions, birthday parties, intimate weddings or family gatherings.

Accommodation for 22 persons in 9 bedrooms 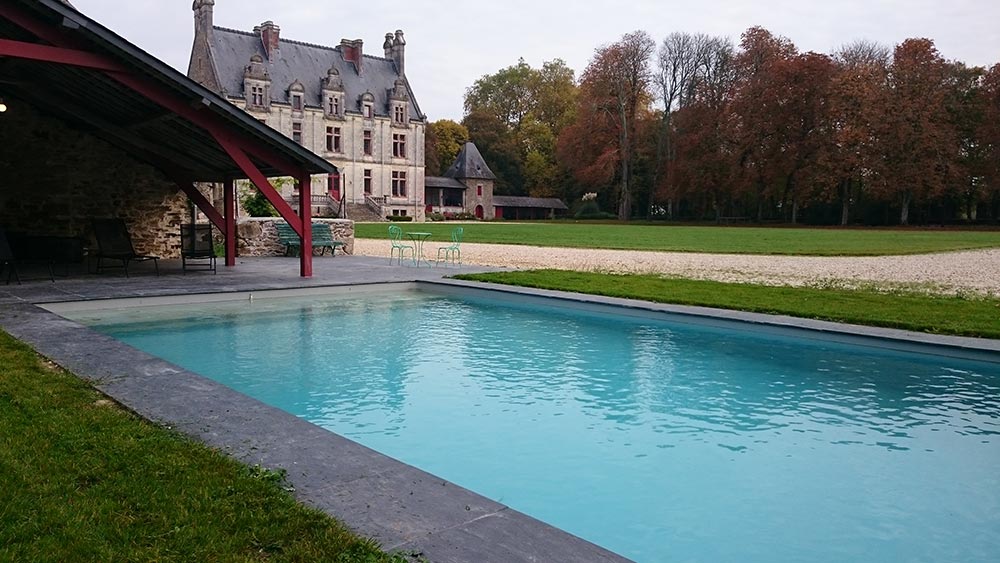 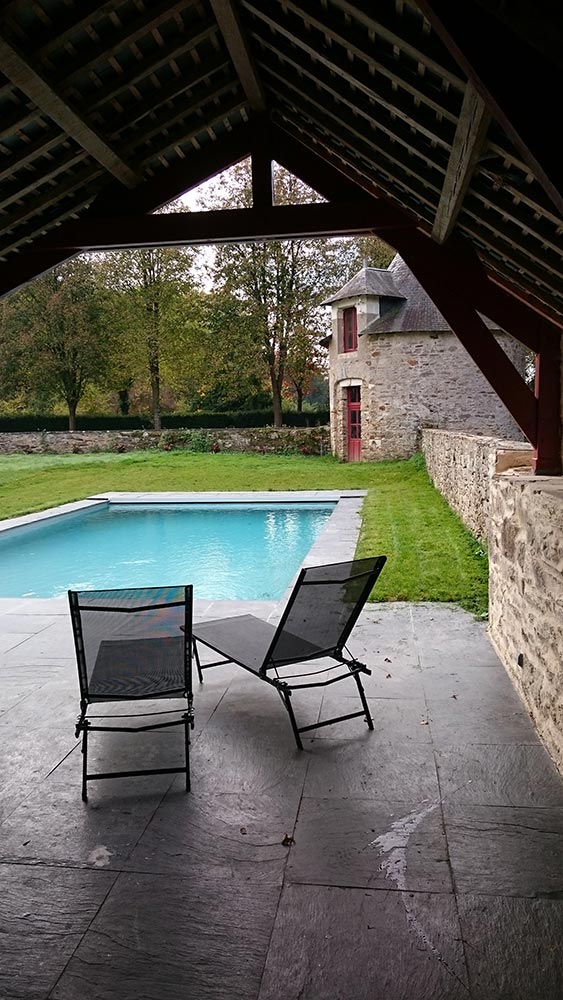 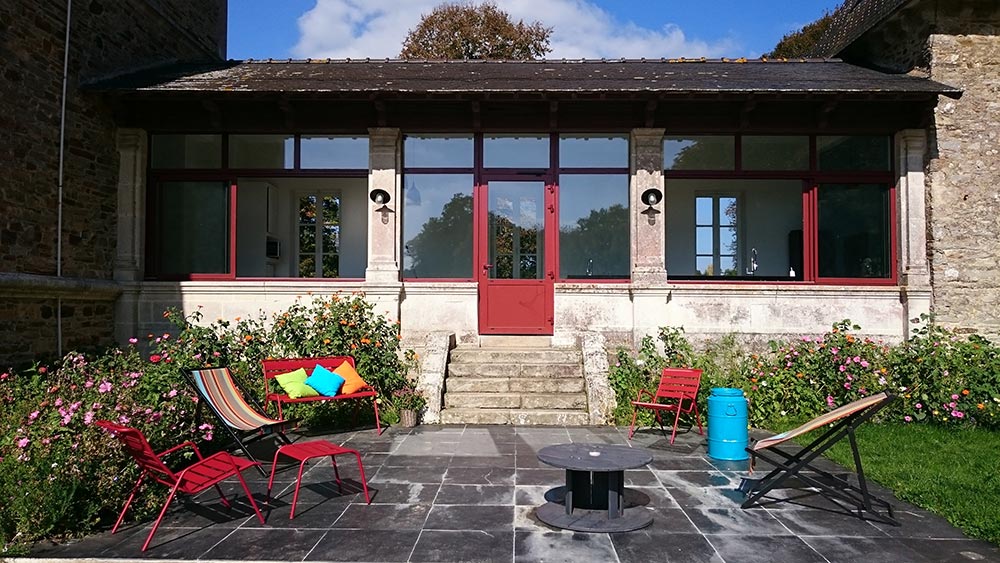 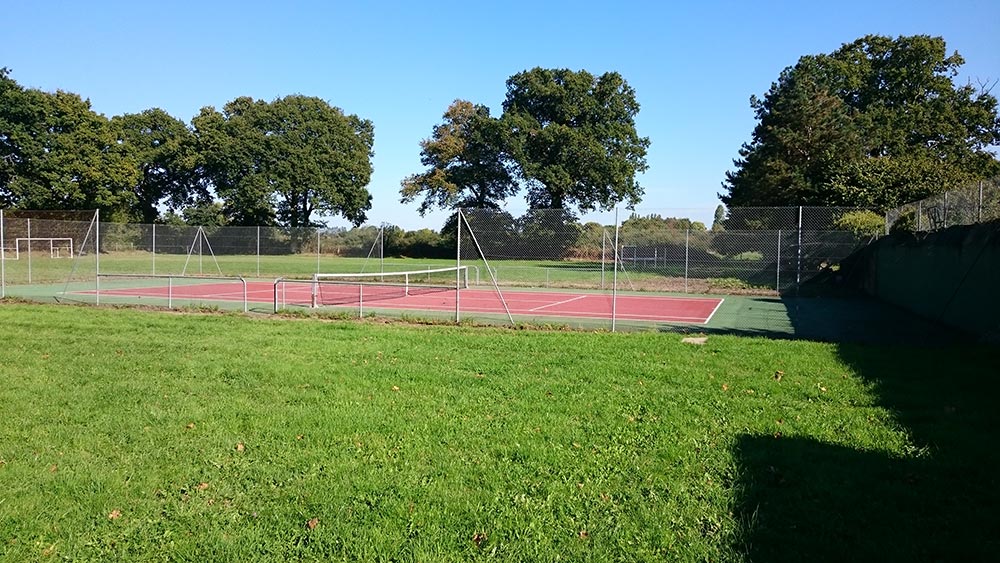 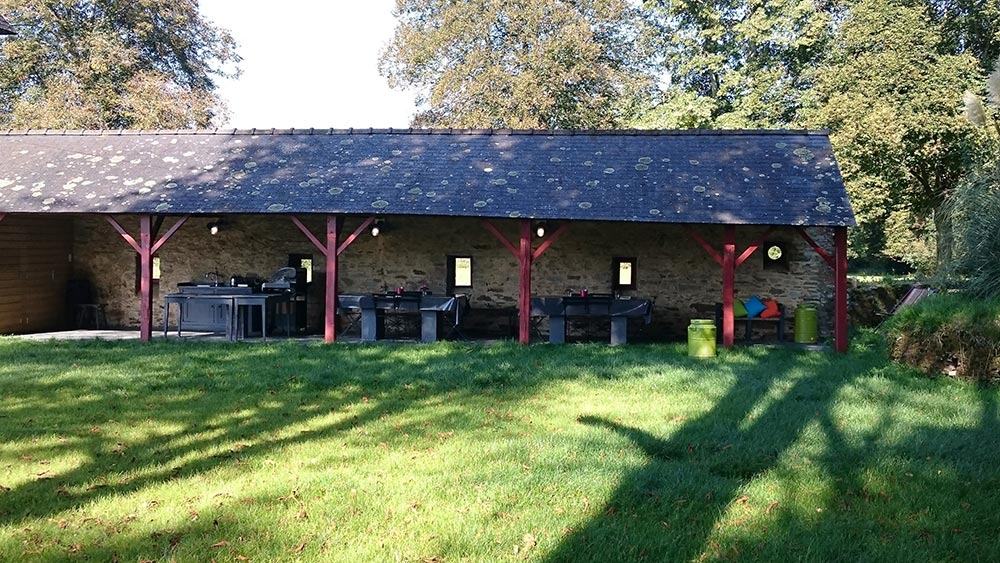 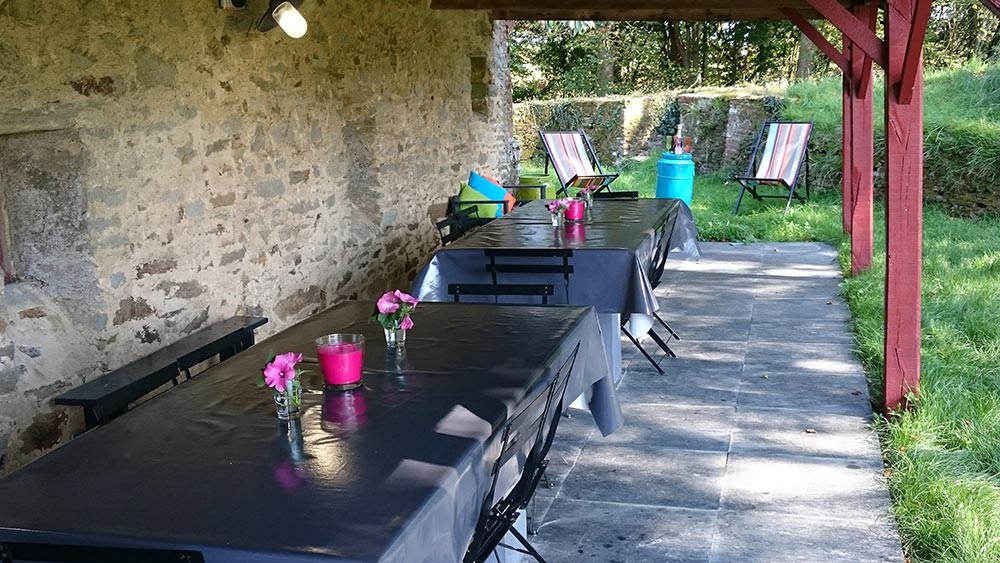 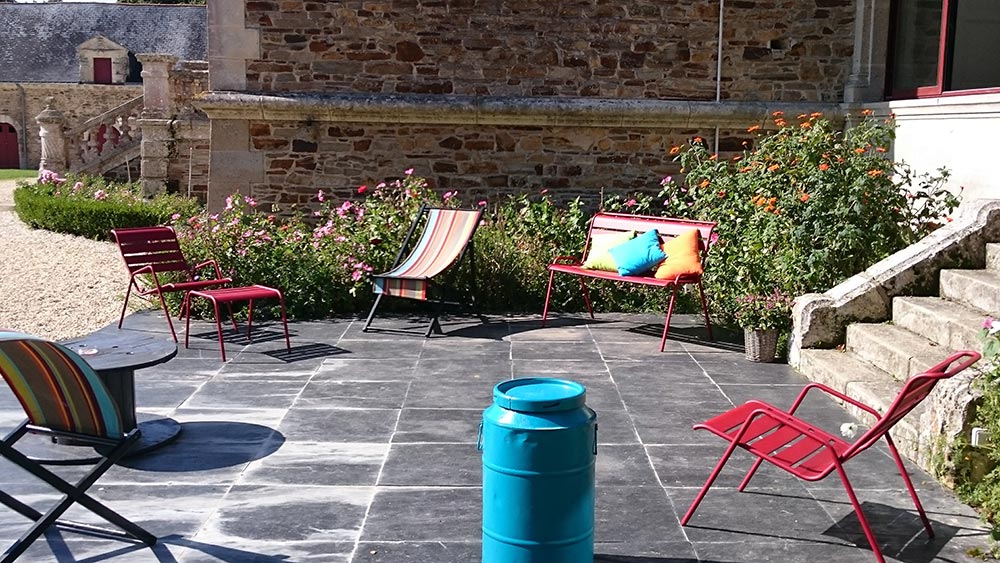 Fully renovated in 2015 for an unparalleled comfort, the main building is from the 19th century and is framed by towers and out buildings of the 17th century. The water pit of the 13th century, now vegetated and which formerly framed the castle remind us of the rich history of the place. Experience the château lifestyle at Château de Coislin whilst enjoying the seashore life just next door (Coislin is only 30 minutes from La Baule and Pornichet), the perfect spot to gather with family and friends for a week vacation or for just an unforgettable weekend away. The vast estate has a swimming pool, tennis and football field.  If you exhaust the many amenities of the castle, the surrounding activities are numerous (Nantes, the sea, the golf courses, the hikes ...).
Are you looking for a wedding venue, a week-end away or holidays in France ?
Please contact Us 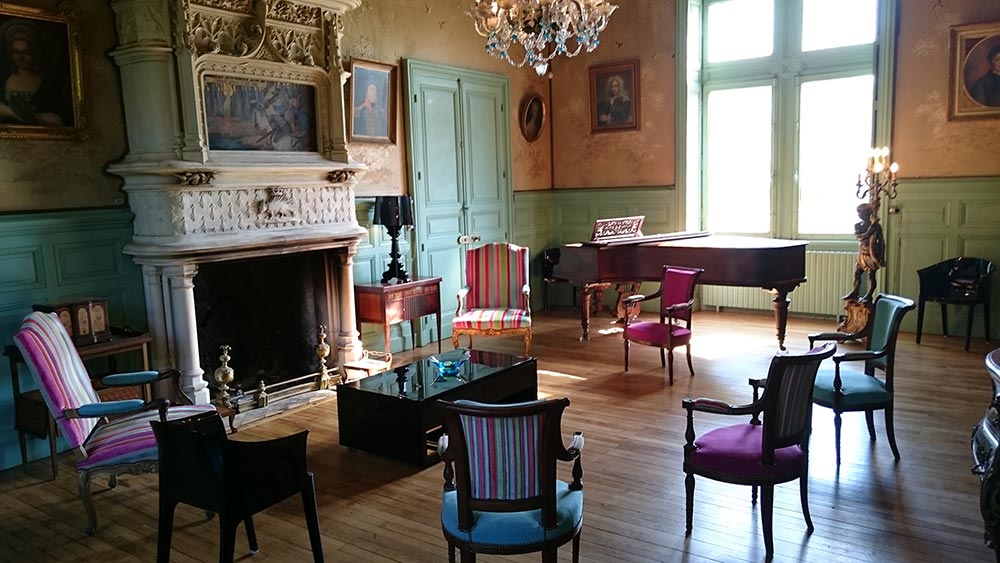 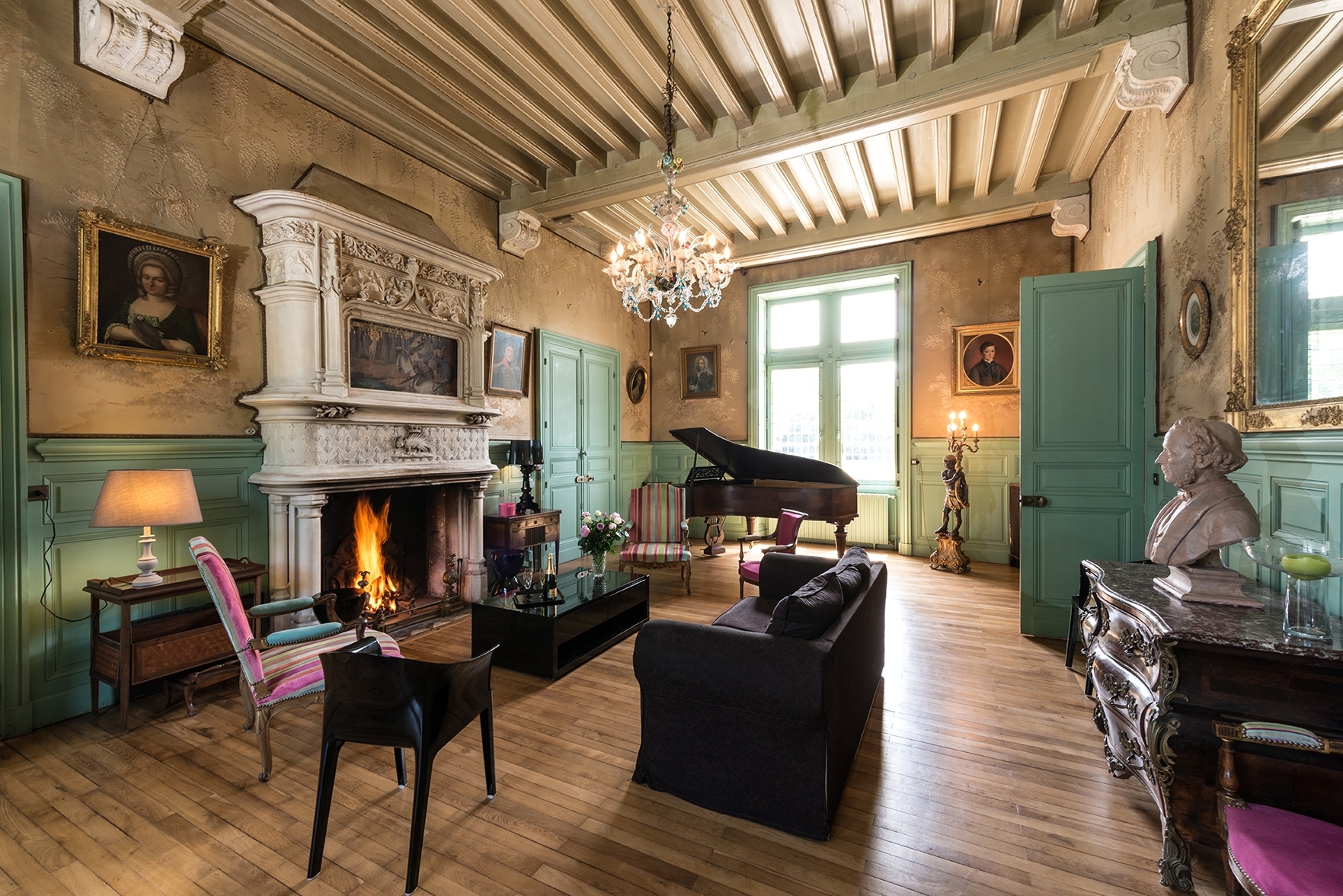 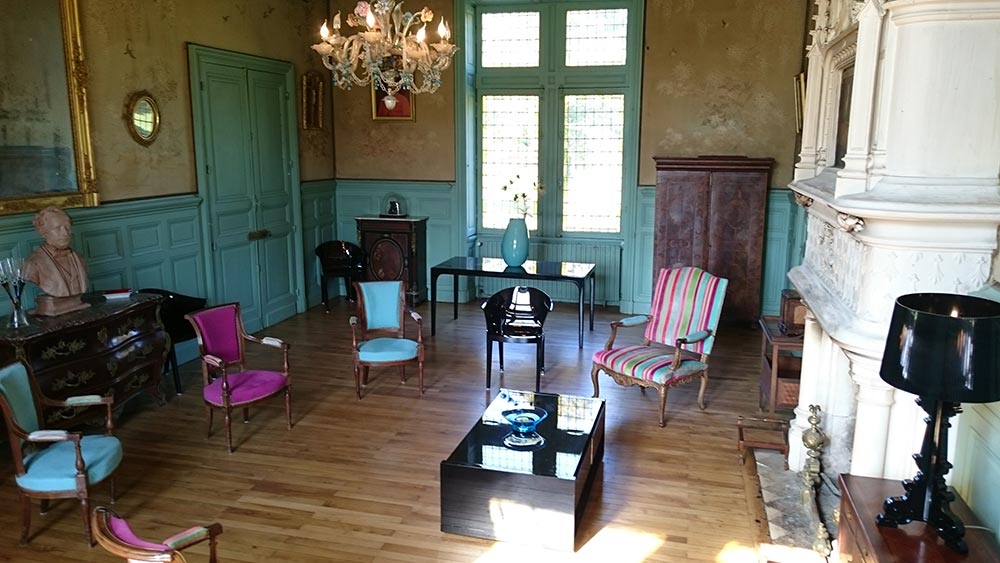 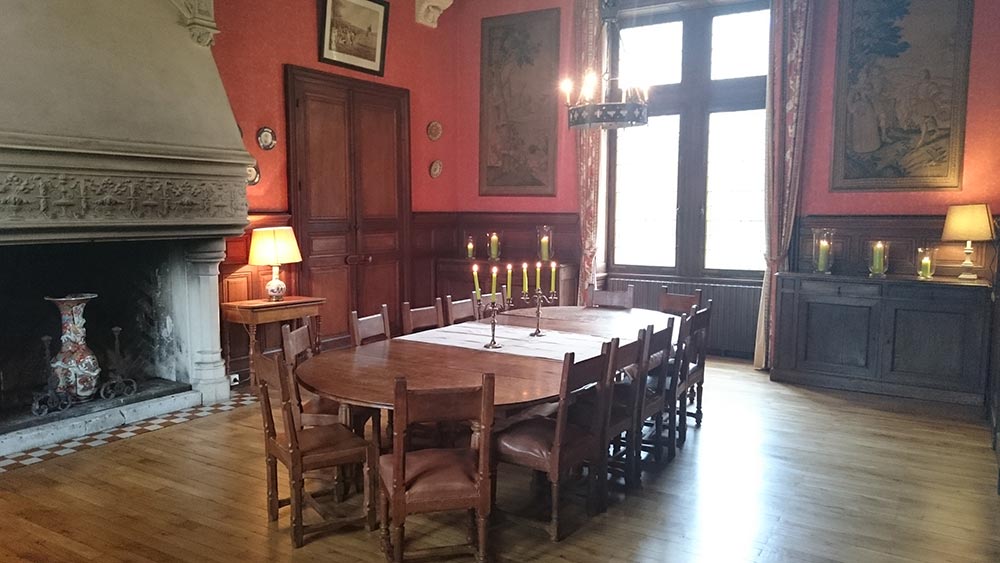 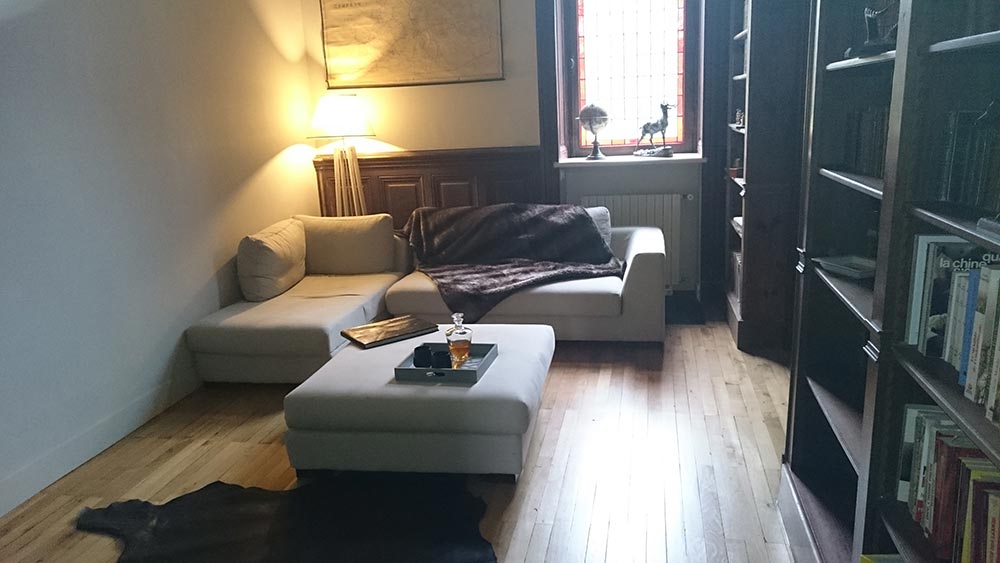 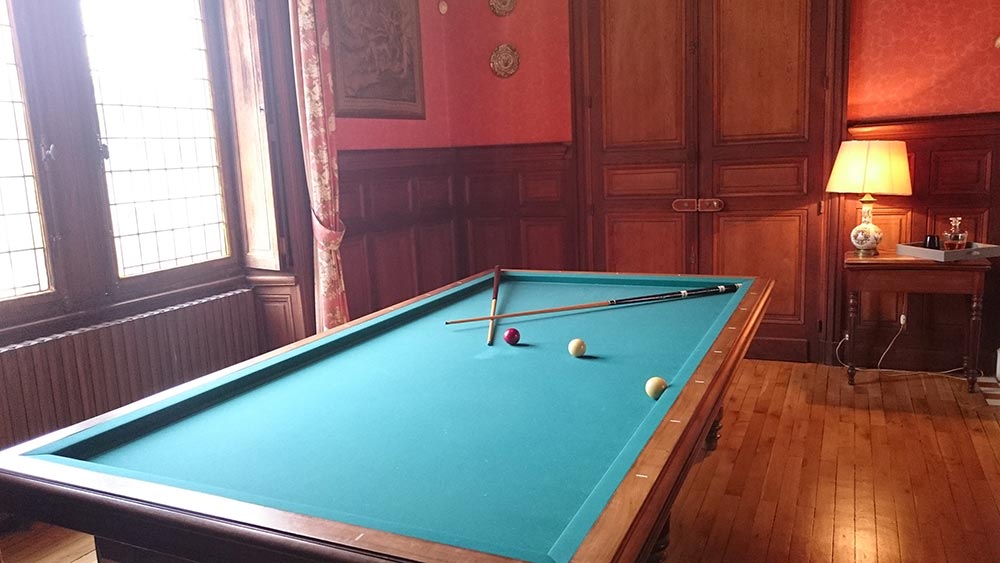 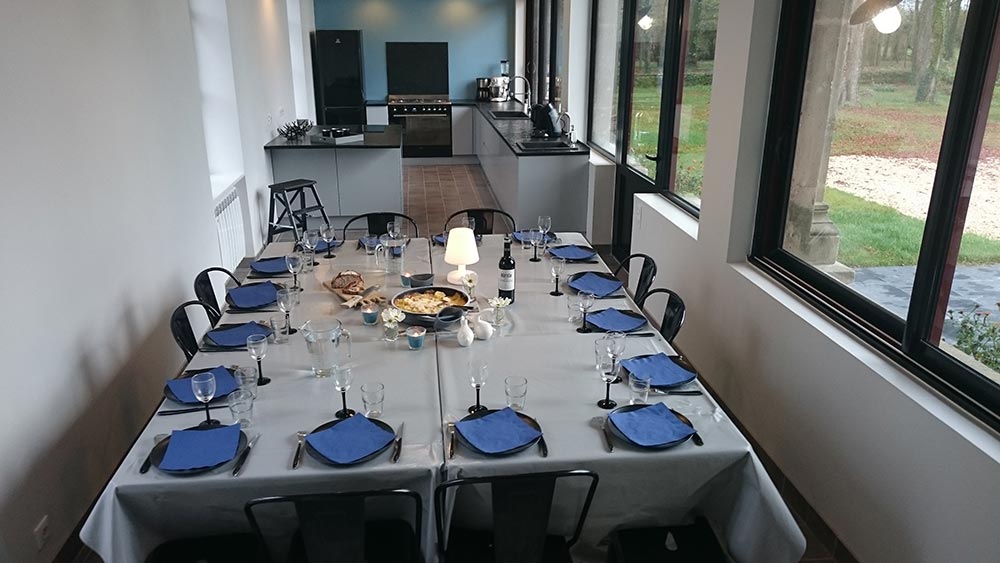 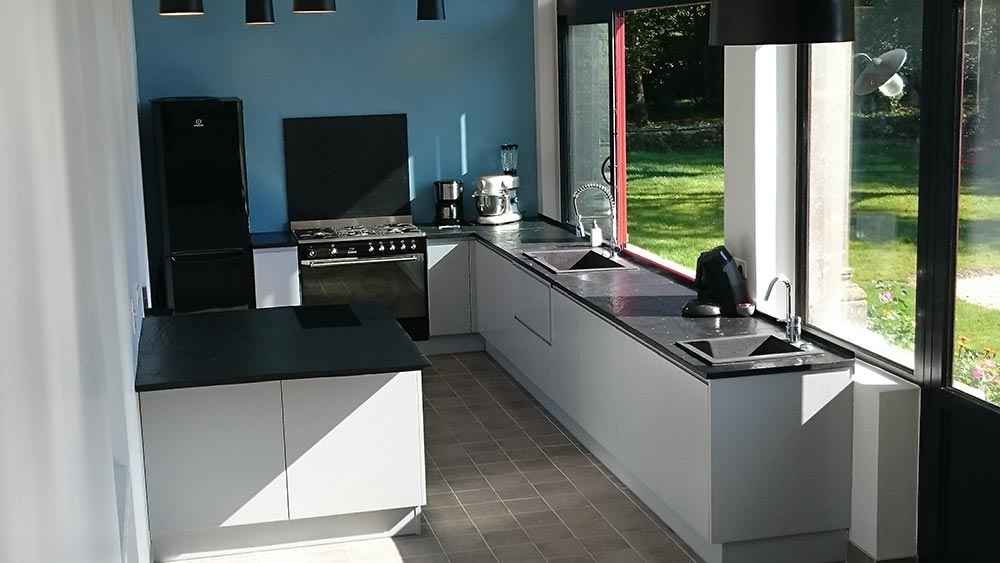 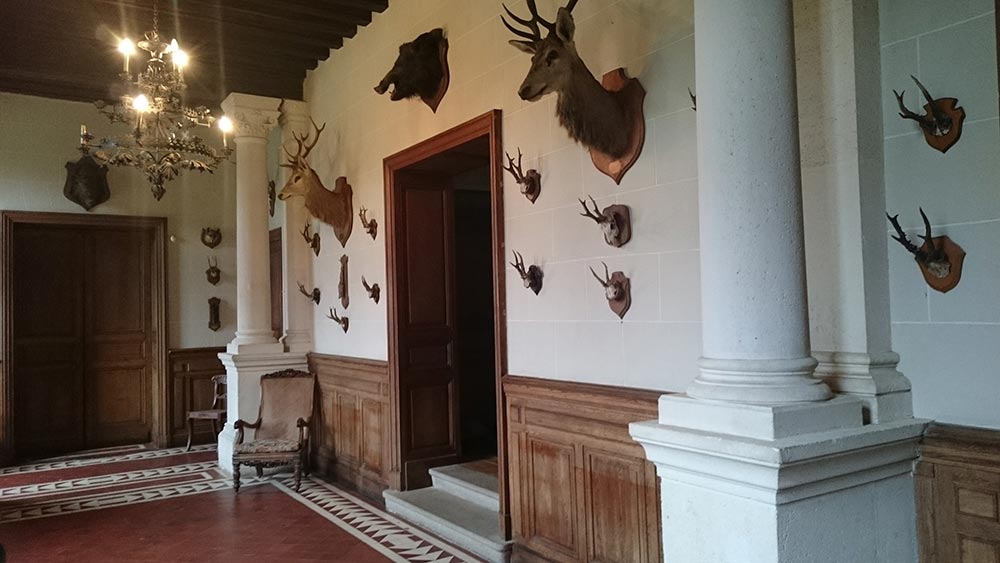 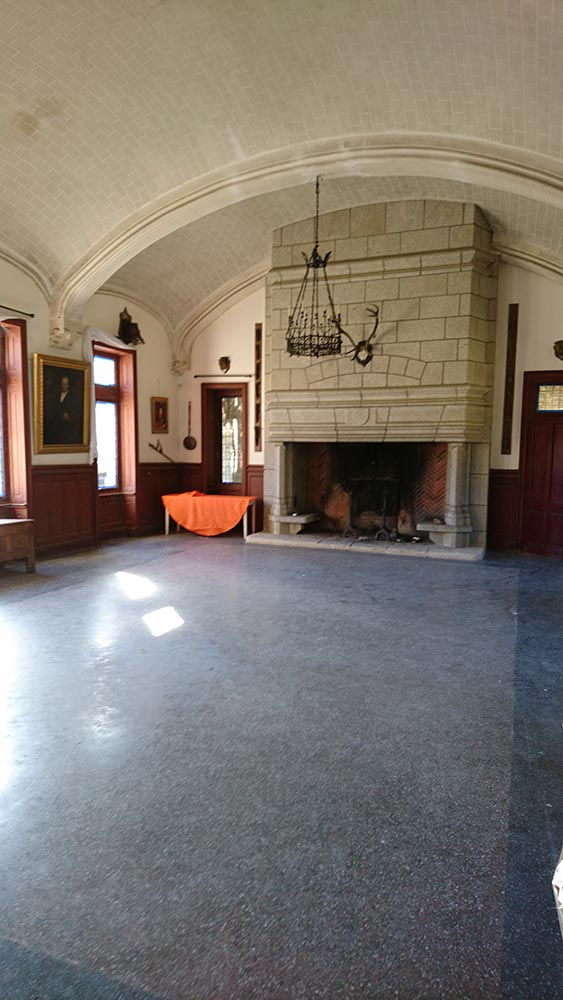 The former Orangerie has been converted in a bright and spacious kitchen, opening on the park thanks to large windows.
Rent our château and experience a slice of authentic french country life
Please contact Us 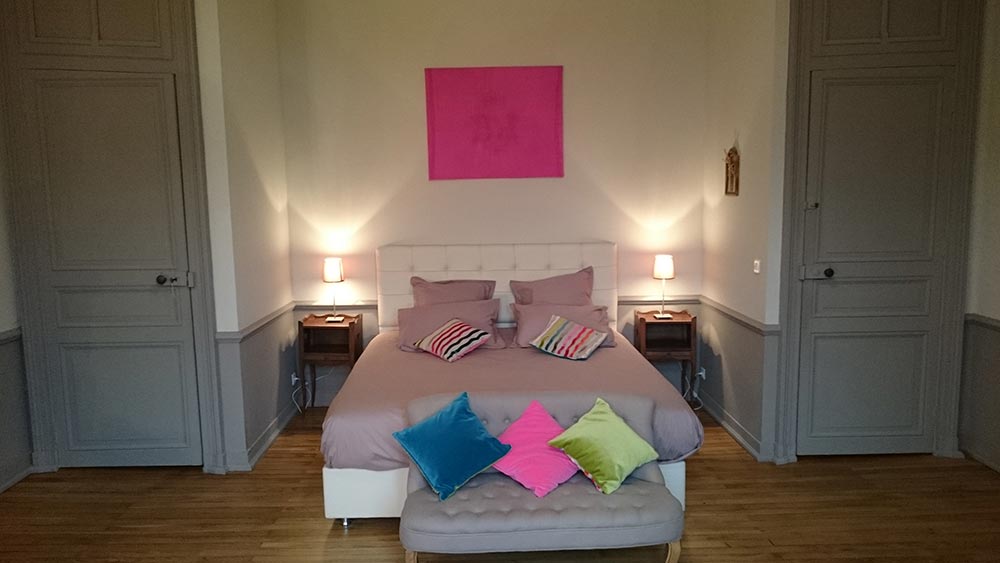 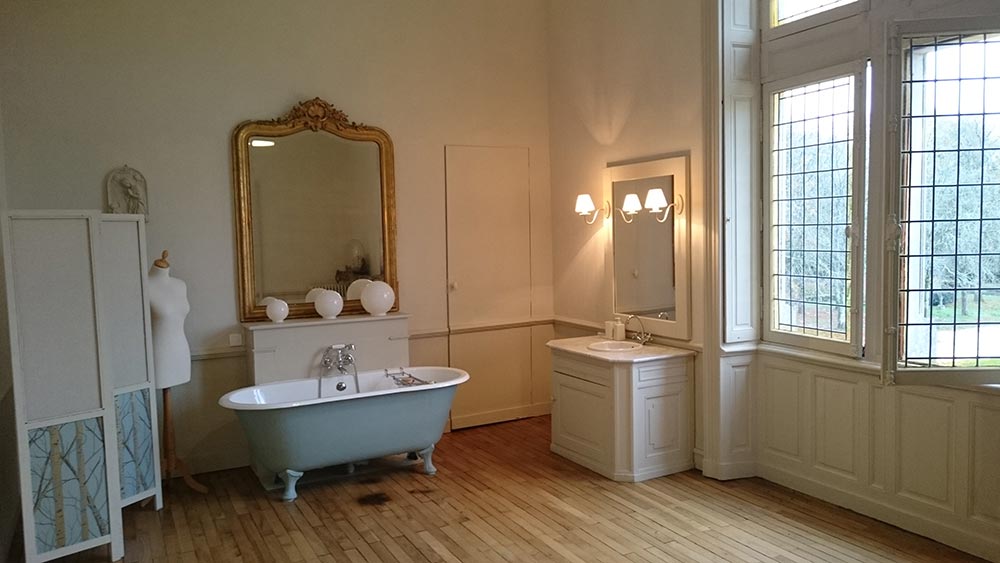 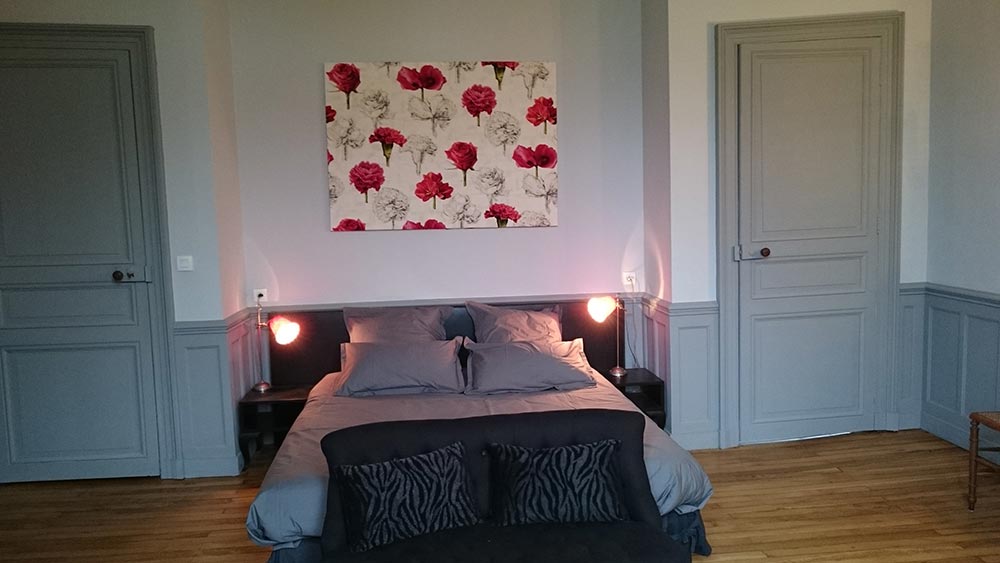 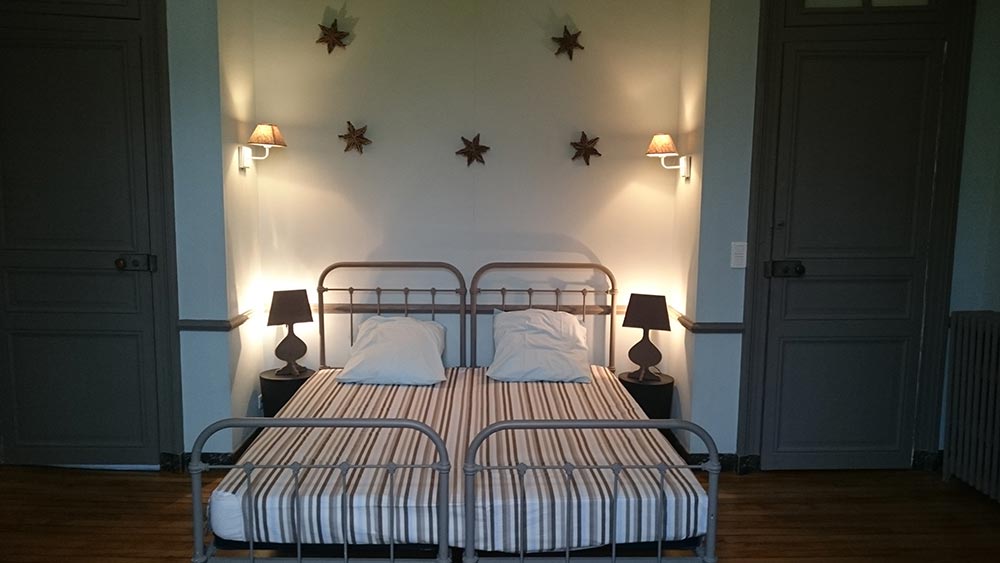 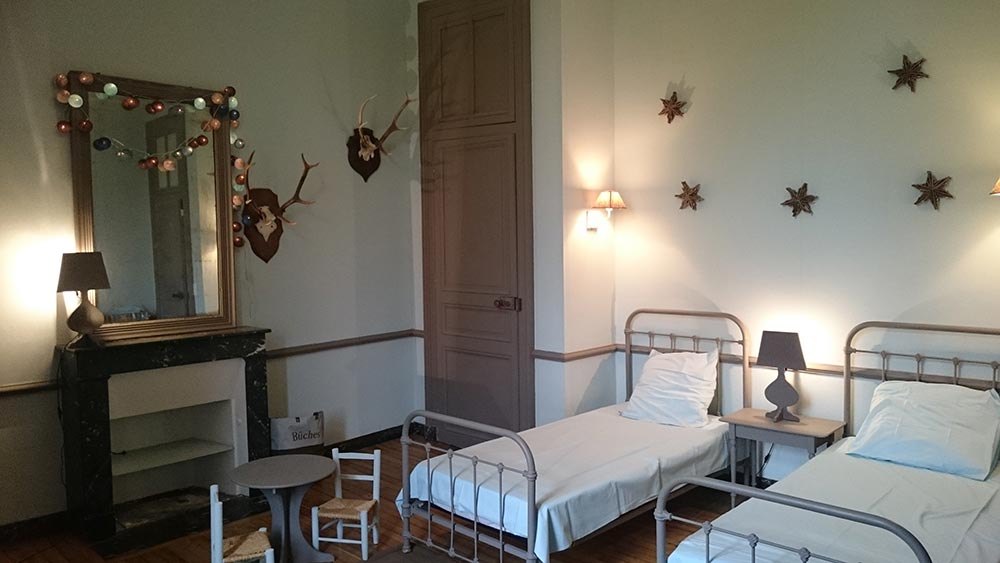 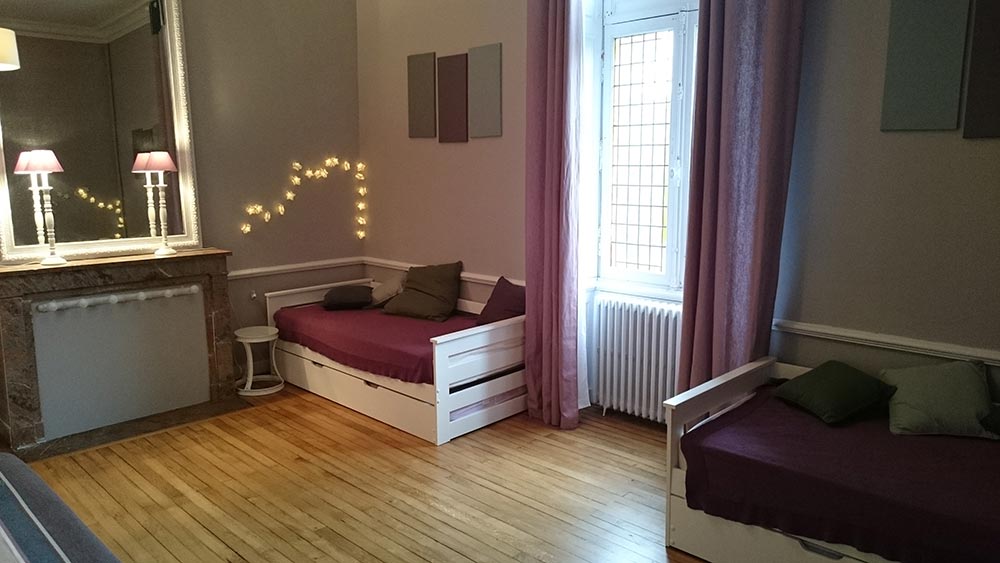 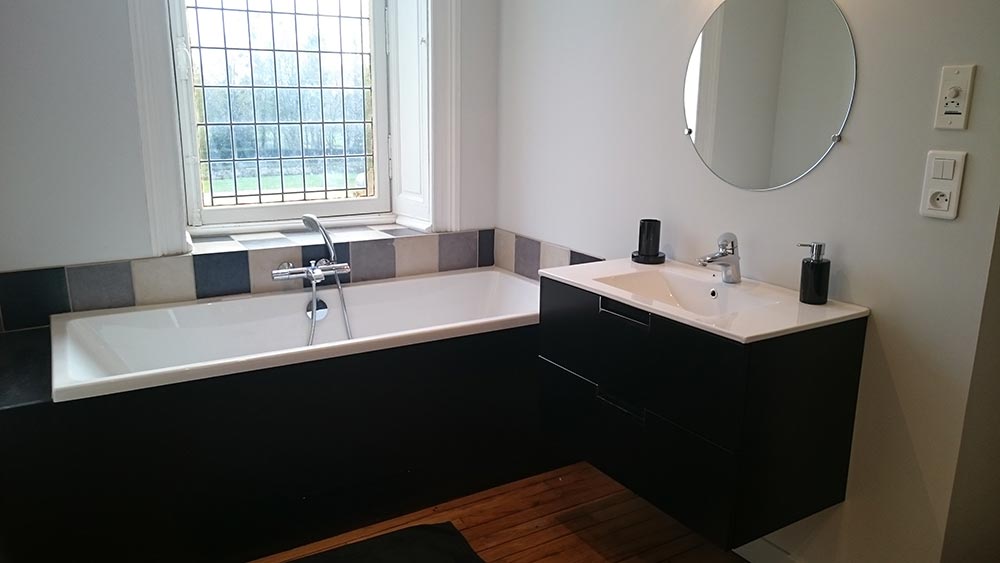 The château de Coislin can accommodate 22 persons (15 adults and 7 children) in 9 spacious and bright bedrooms. It is available in its entirety, including the swimming pool, tennis court, half football field and the park. Rich with a history dating from the Marquisate of Coislin, the château has been renovated to offer your guests a stay in comfort, style and tradition. There are many rooms with convertible beds (2 single beds convertible in one double bed), the accommodation is flexible should you have more single guests or more couples.
Share a unique experience with your family and friends
Please contact Us

The property is rented out in its entirety to a single group, who will have access to the château and the grounds for accommodation for 22 people. The rental price includes rooms, and the charges for heating, water, electricity, garden maintenance, pool, cleaning the chateau, and linenhouse. Bed linen and towels are provided. Beds made on arrival. Only the « taxe de séjour » (a few euros per person) remains to be paid upon arrival. Damage deposit: 3000 euros.
We speak for our owners. We offer the best pricing.
Please contact Us

The château of Coislin used to be the main city of a duchy-peerage erected by Louis XIV in favor of Armand du Cambout, knight of the order of the King. There follow the families Musse, Guennec, Baye and Cambout. Coislin was an old seigniory, nowadays located on the commune of Campbon. It was an important feudal possession of the county of Nantes. During the dismemberment of the feudal castle in 1565, it was acquired by René du Cambout, lord of Coislin. From then on, the ascension of Cambout and Coislin began. The lordship of Coislin was then erected as a marquisate at the initiative of the king in 1656. From this lineage of Cambout, several emblematic figures including Louise du Plessis de Richelieu, aunt of Cardinal Richelieu who married François du Cambout. From their union were born several children. Another emblematic figure of the Cambout de Coislin family, Marie-Anne, marquise de Coislin, mistress of Louis XV and who was at the origin of the construction of the hotel de Coislin, located at the corner of the rue royale and Place de la Concorde in Paris. During this period, she worked with Chateaubriand, who was one of her tenants and became her friend and confidante. The name of some rooms of the château are named after them: Marie-Anne room, Louise room. You will also find the room of Armand, who was knight of the order of the King and the room Henry-Charles du Cambout, bishop of Metz and commander of the order of Holy Spirit.
Experience the Château Lifestyle.
Please contact Us 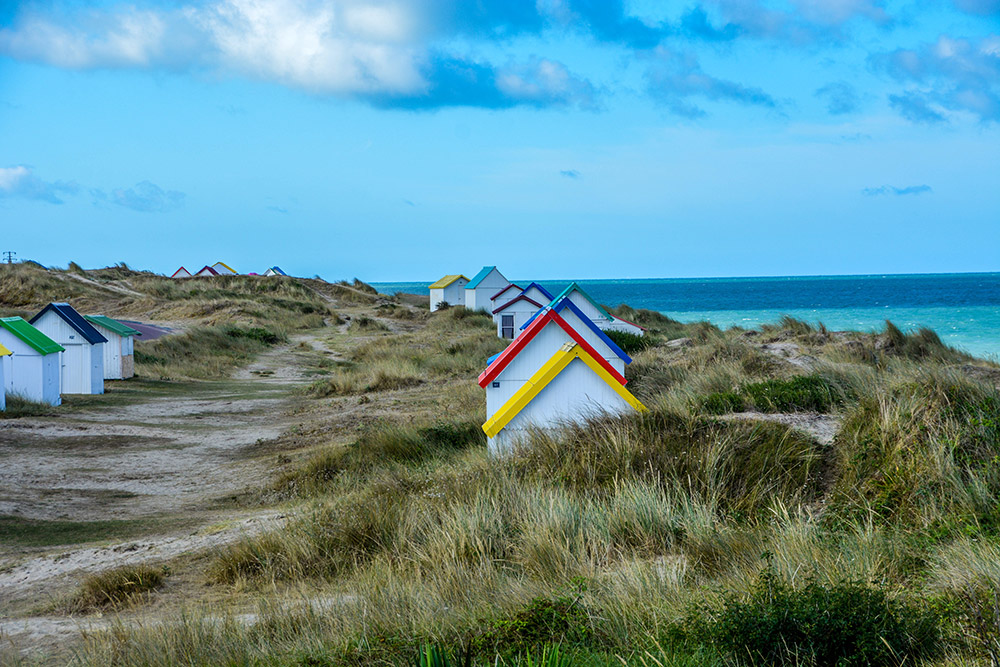 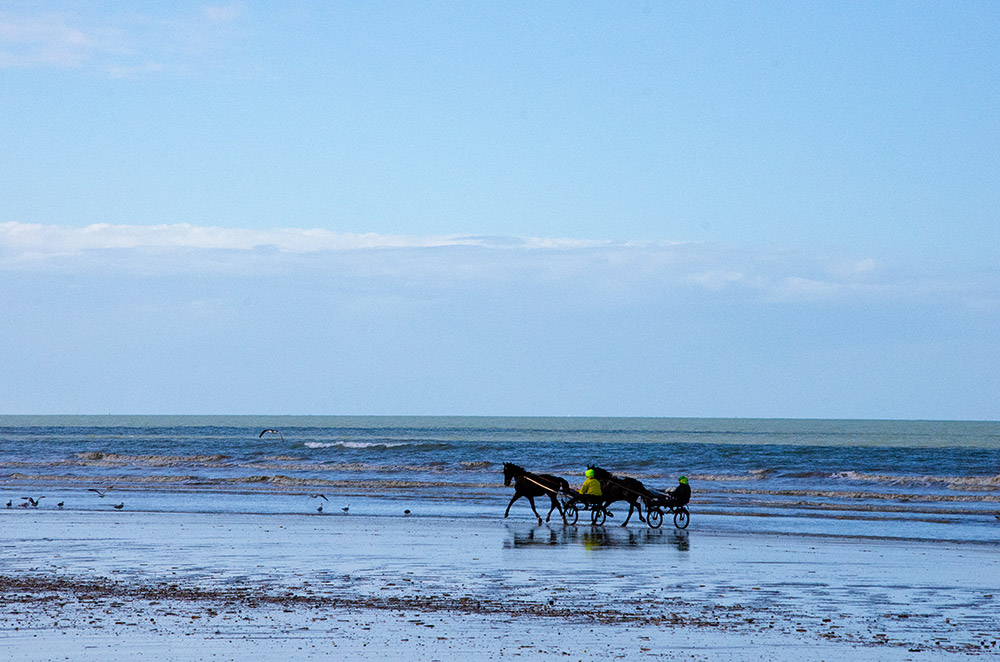 The château of Coislin enjoys an exceptional location near La Baule and Pornichet. Half an hour drive from the château you can enjoy the sea, the beaches and all the water activities of the region. The water and leisure base, Espace Quilly, in the nearby town of Quilly, offers jet-skiing, water skiing, wake boarding, flyboarding, towed buoys but also quad or 4x4 hiking. Circuit formulas on prestige cars are also available. In the heart of nature and integrated into a green setting, the Espace Quilly offers sensational activities all year round, all supervised by qualified instructors. Golf enthusiasts will be delighted, as many golf courses (Savenay, Bretesche, La Baule) are nearby. The Puy du Fou leisure park (1h30 by car) where spectacular shows with historical themes take place will delight young and older ones.
More information ?
Please contact Us