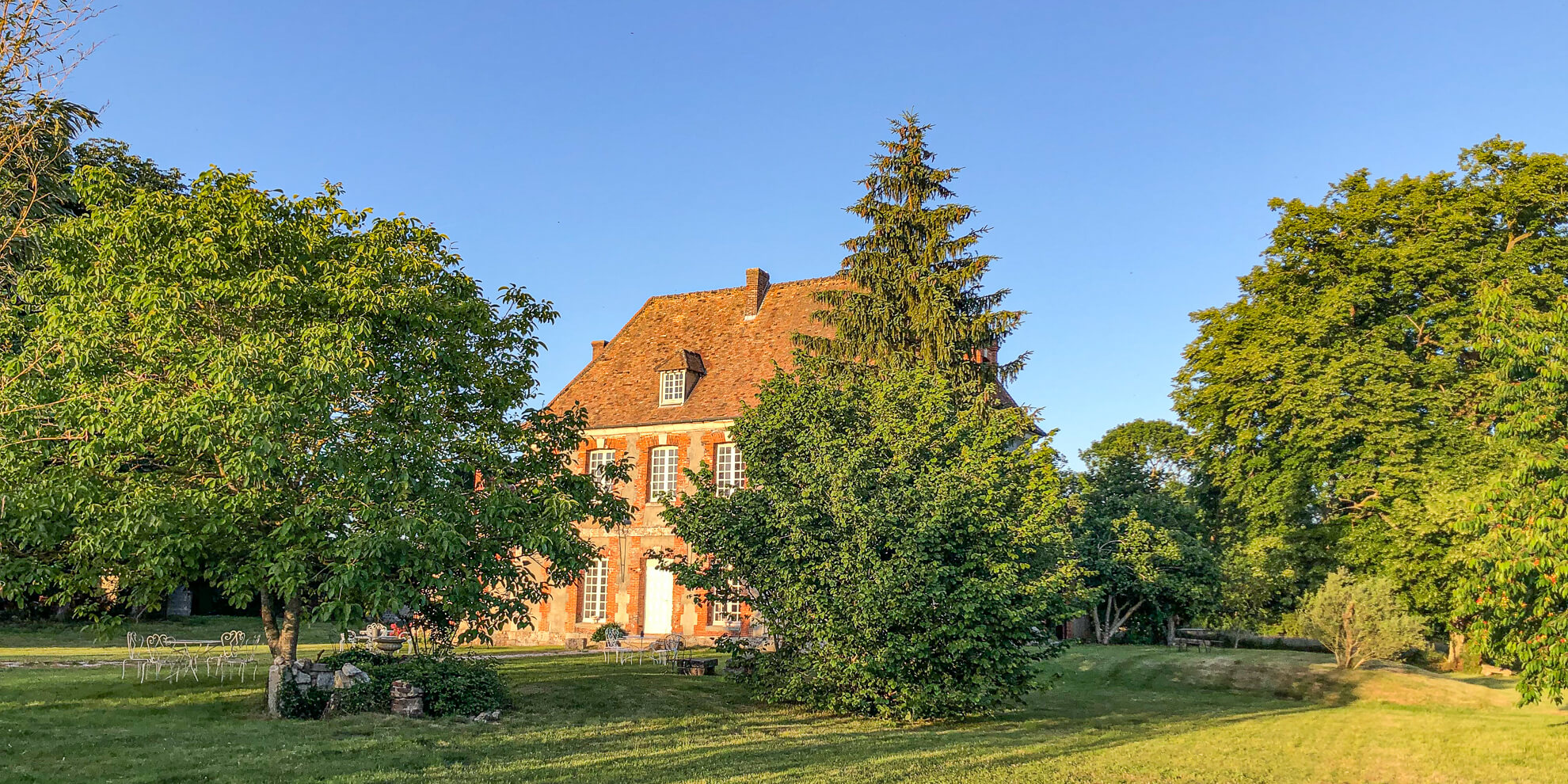 15th century chateau in the heart of the Iton valley, surrounded by a large park of 1 hectare, at 1h20 from Paris and 20 km from Evreux, it can be rent all year in its entirety. The castle can comfortably accommodate 11 people. Near Rouen, the castle of Feuguerolles de Hellenvilliers is the ideal place for your family holidays, weekends with friends or to organize your birthday, a family party or any other private event up to 50 people.

PARK OF 1 HA NEXT TO THE CHURCH OF SAINT AMAND, ABSOLUTE CALM 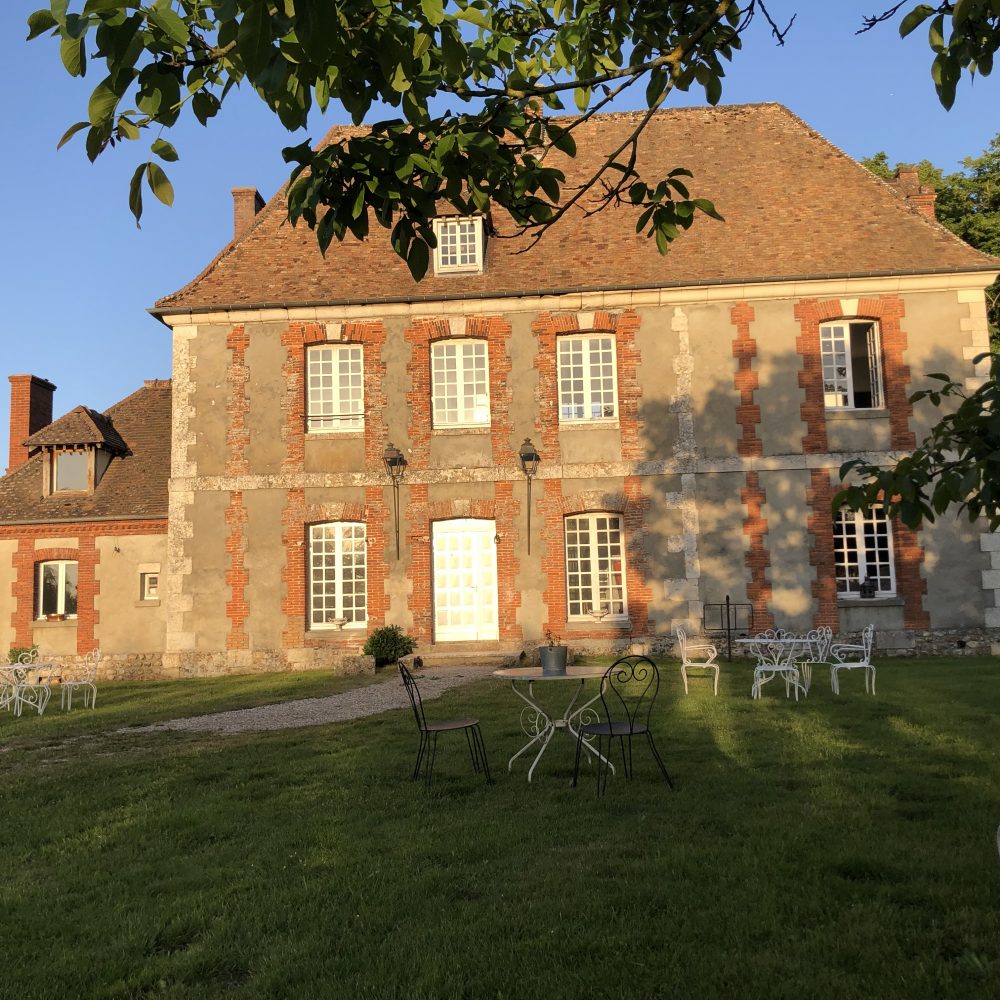 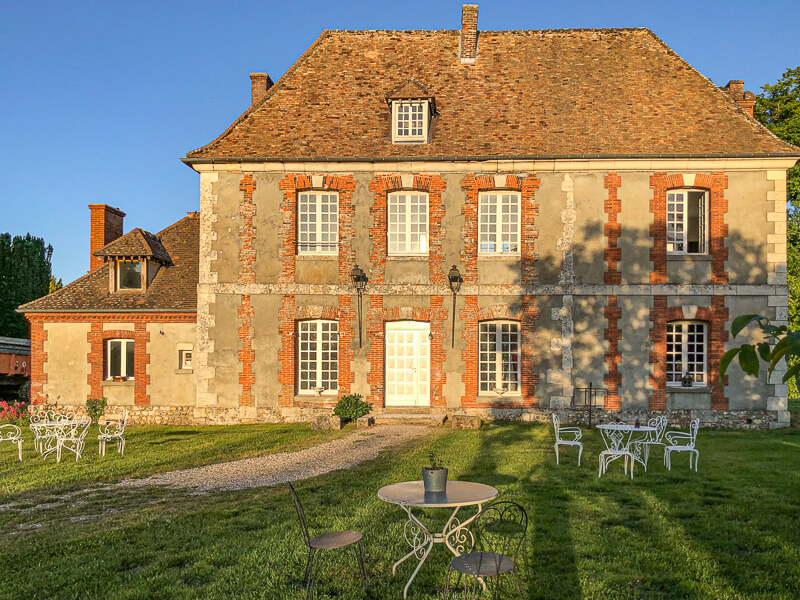 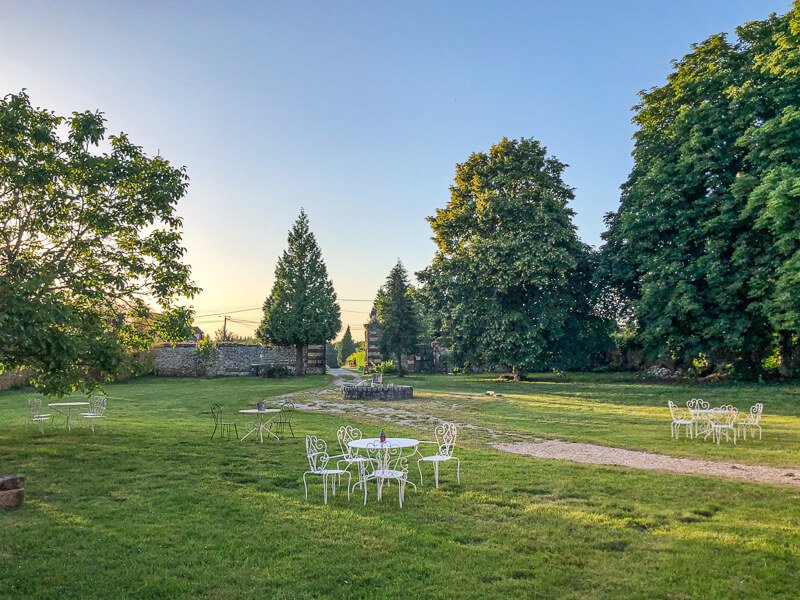 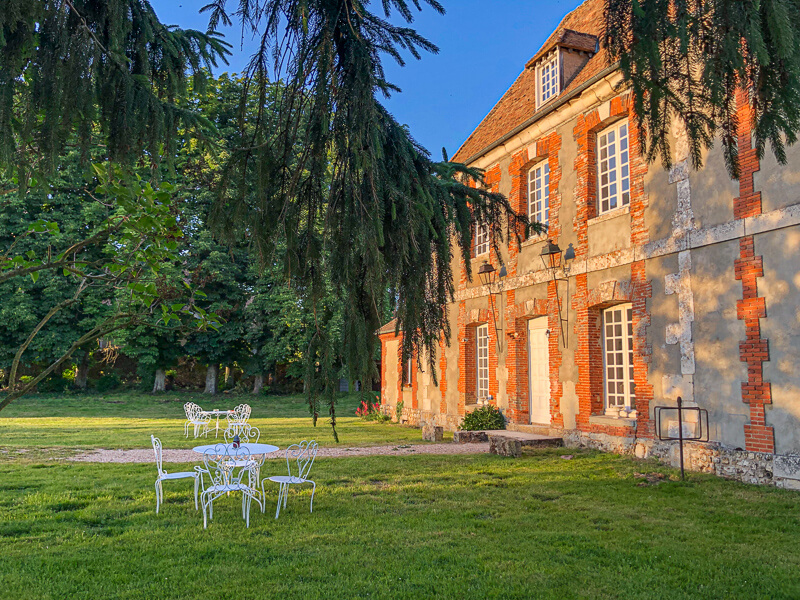 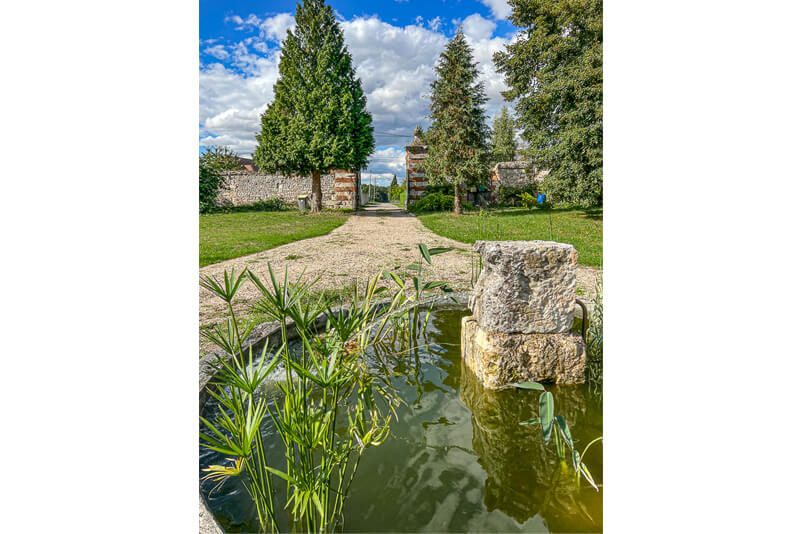 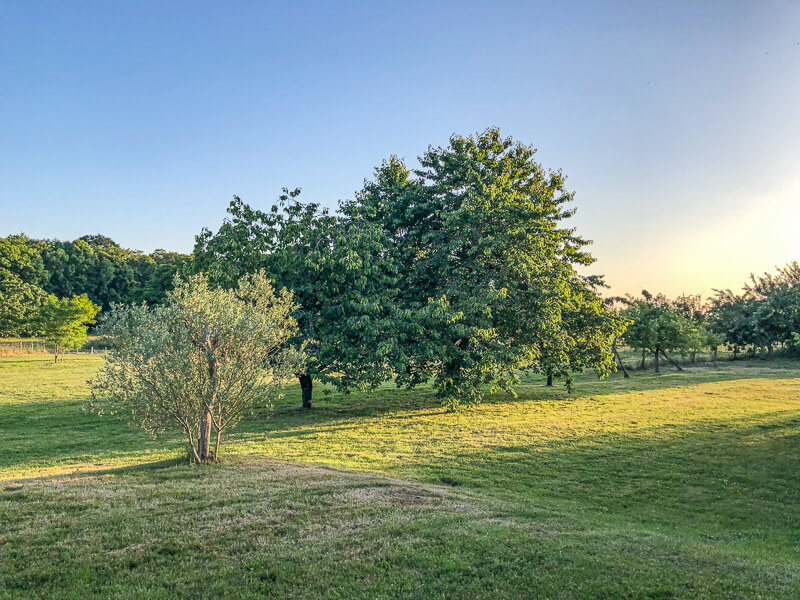 The Château de Feuguerolles de Hellenvilliers is a 15th century residence built by Richard de Hellenvilliers, squire and Lord of Feuguerolles. The castle and its estate were embellished until the end of the 18th century by his successors, of Italian and Spanish origin. In a green setting, in the heart of a large park next to the church of Saint-Amand, where apple trees, cherry trees, walnut trees and large conifers flourish, the castle, which is available for rent in its entirety, can accommodate up to 11 people in 3 bedrooms and 1 boudoir, for holidays or a private or professional event. The castle will seduce you with its large living room and its majestic fireplace, its careful decoration, punctuated with furniture and objects of contemporary and refined design. 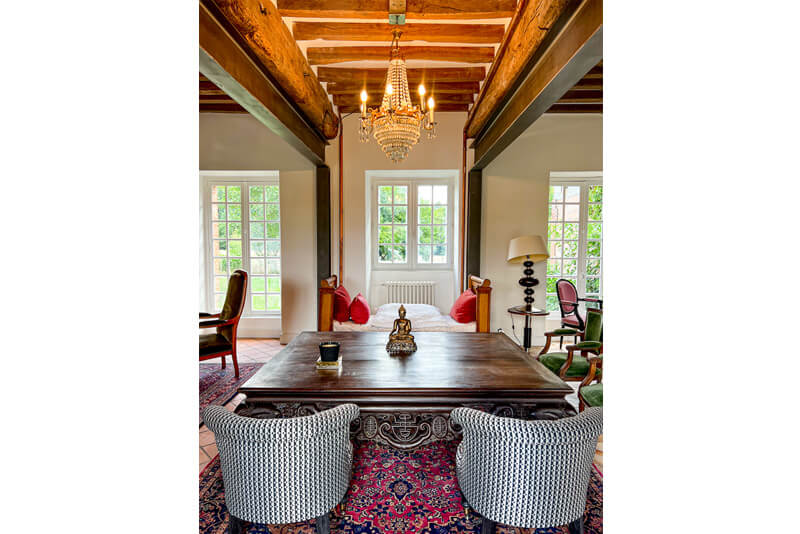 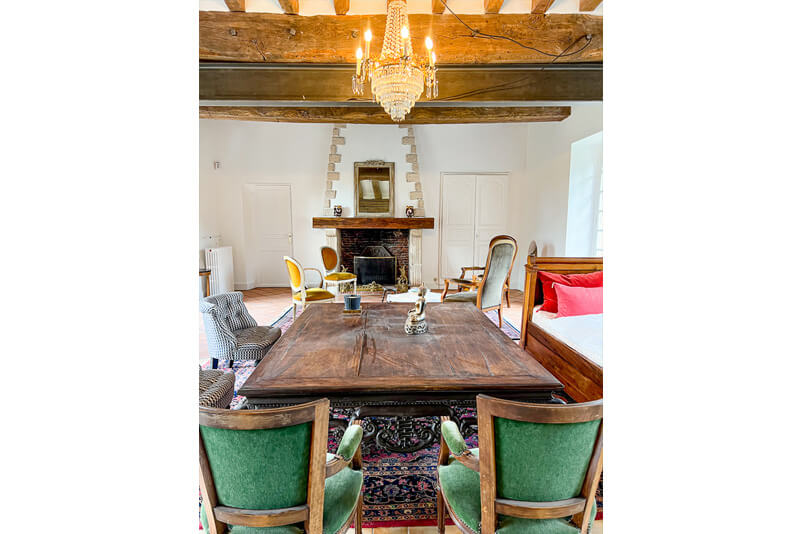 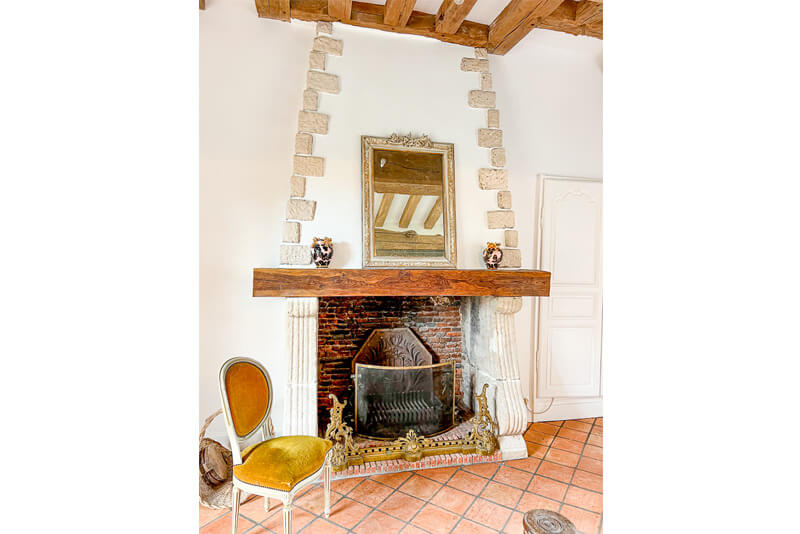 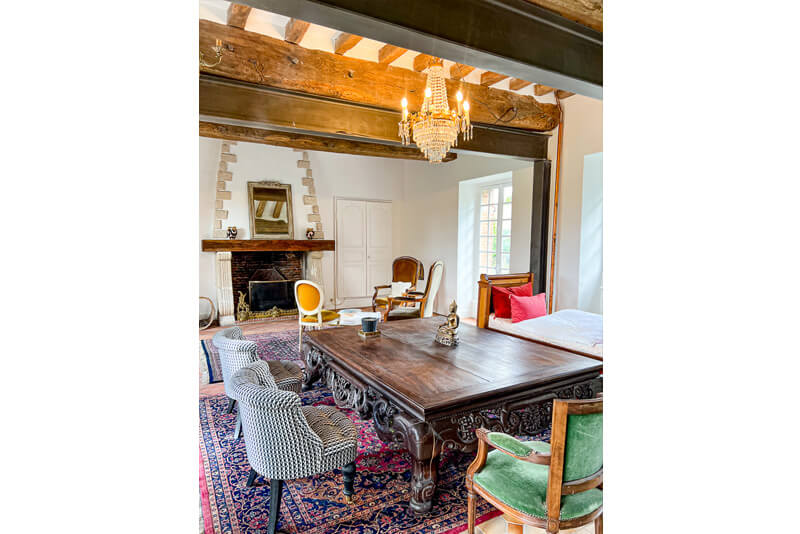 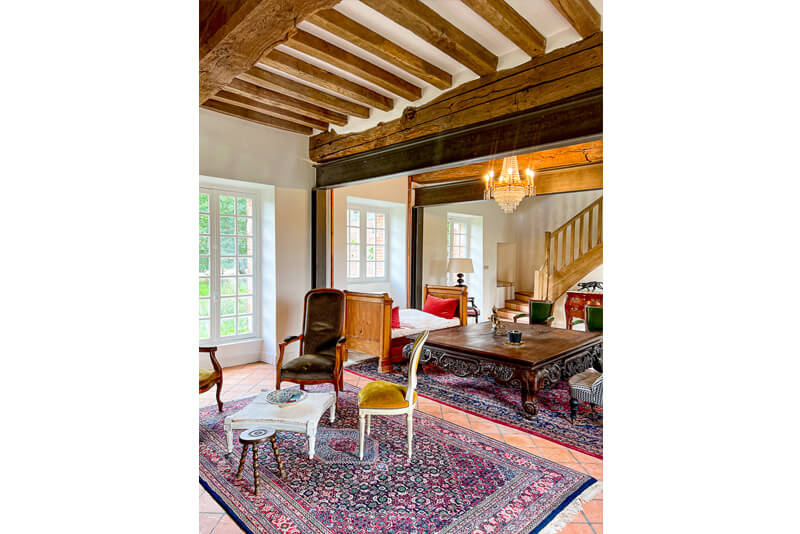 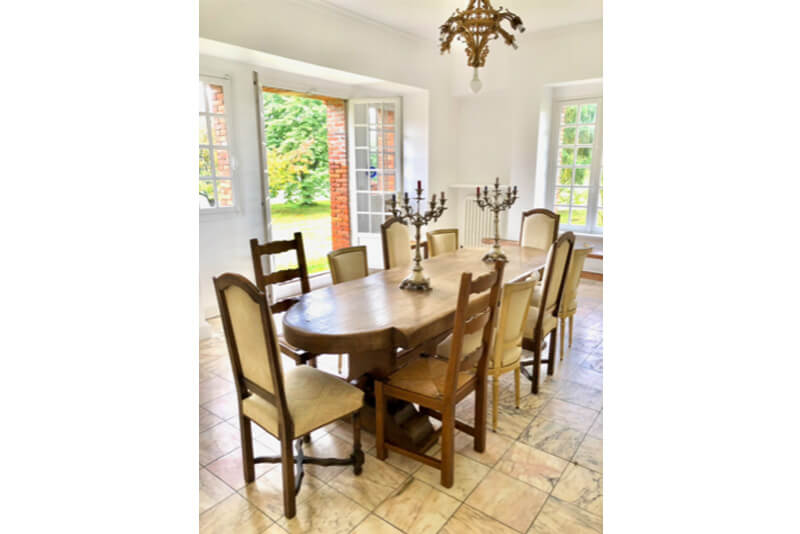 The ground floor of the castle has a very large dining room and a spacious lounge. It can easily accommodate up to 35 seated people for a private reception and up to 50 people for a cocktail party or a buffet. It is therefore the ideal place to accommodate your family and friends for a weekend or to celebrate a birthday or a memorable family party. 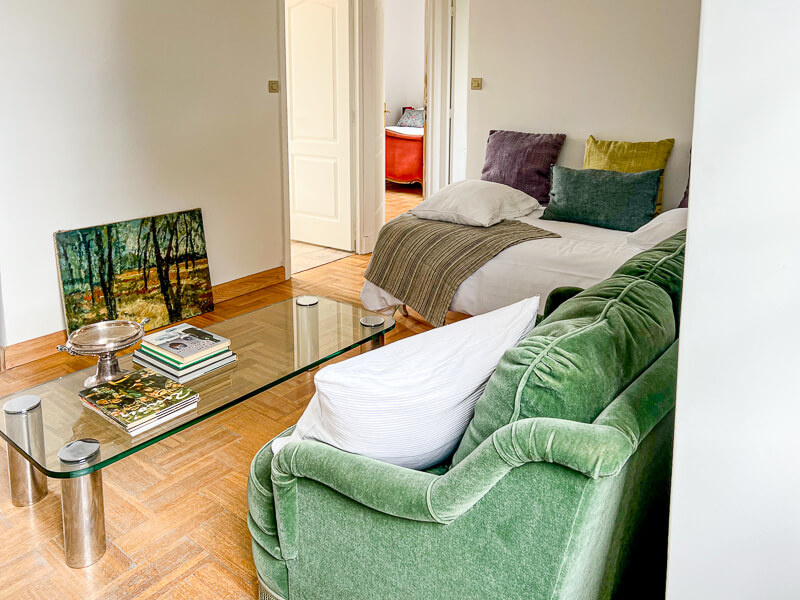 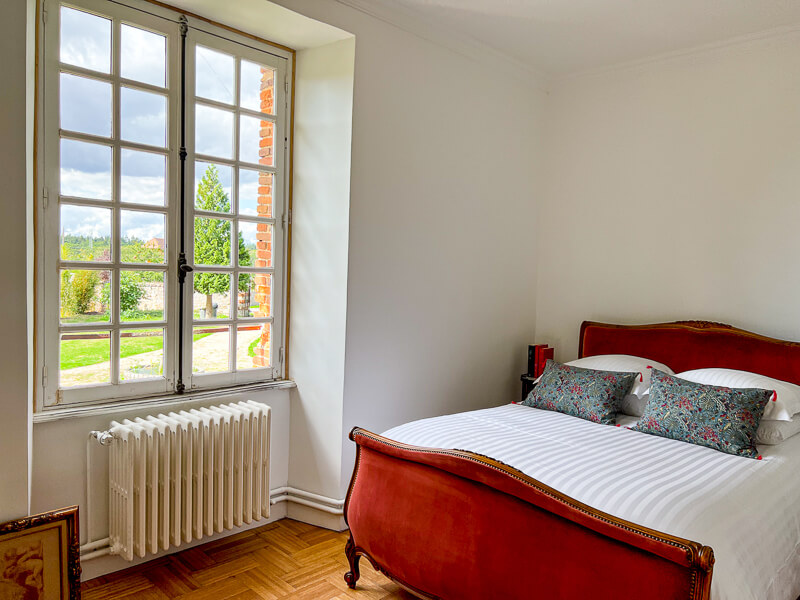 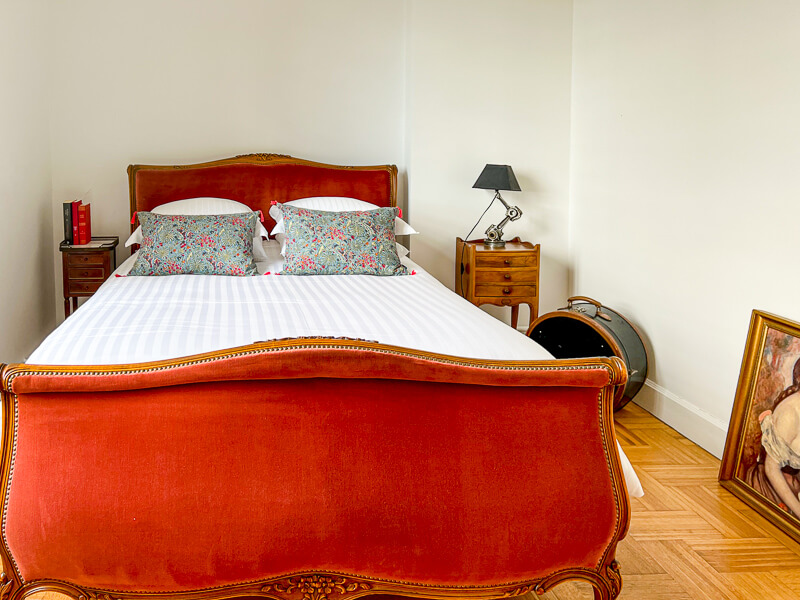 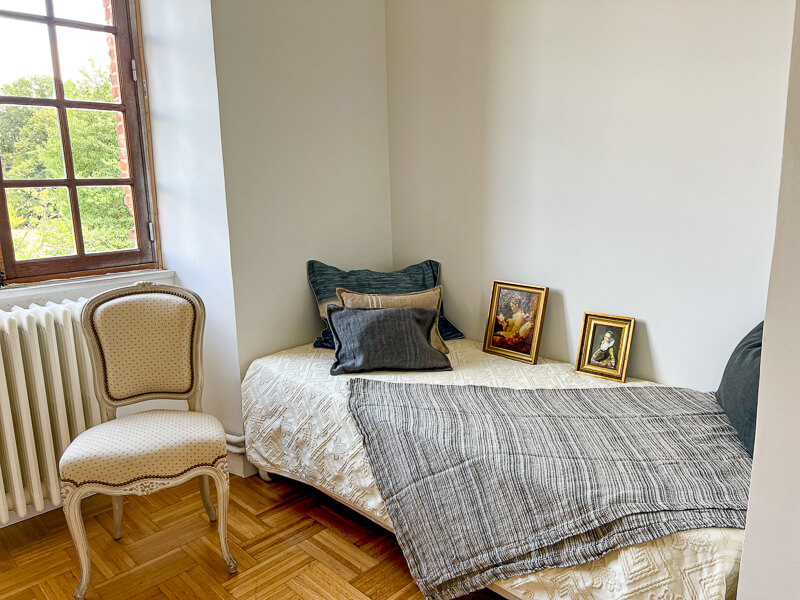 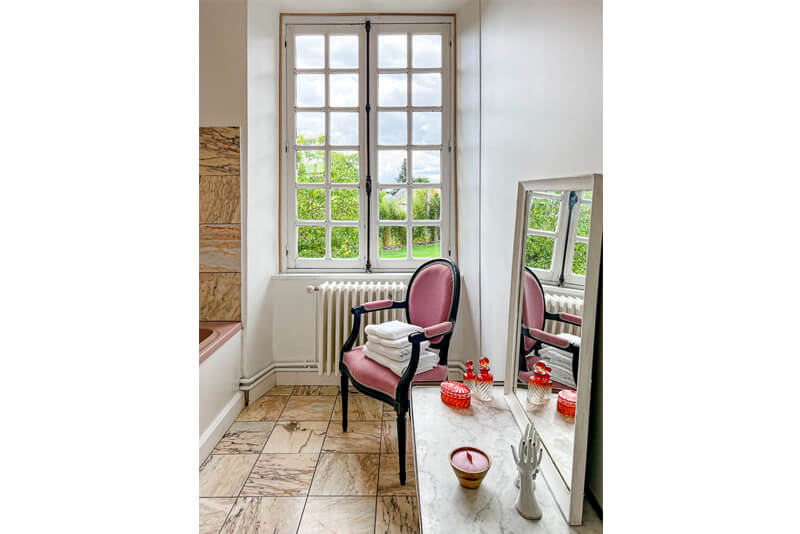 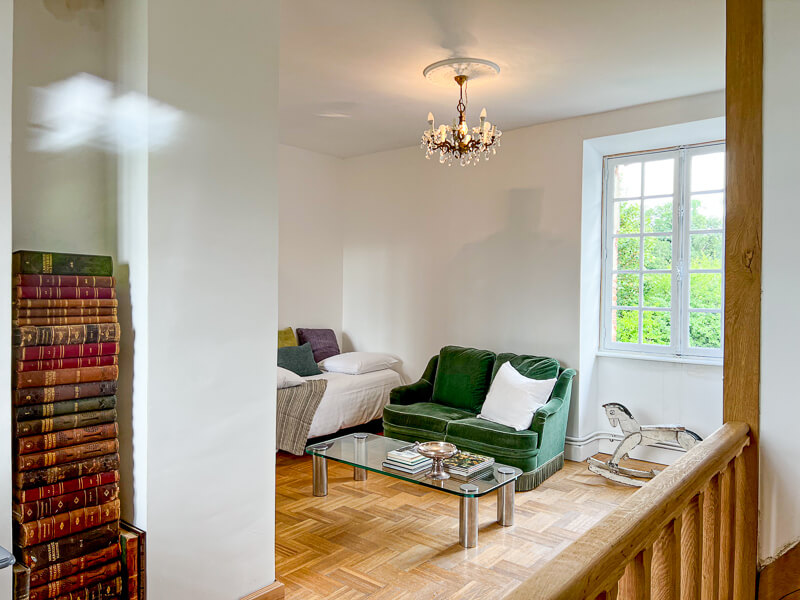 The three bedrooms of the castle can accommodate 8 people. Three more people can sleep in a comfy boudoir.

On the first floor you will find:

The castle is always rented in its entirety to one family. You have the entire property at your disposal, with its rooms and access to the entire estate. The rental price is inclusive of all taxes and includes heating, water, electricity, garden maintenance and cleaning.

A concierge service can be provided as an option.
On request, you can benefit from services such as Extra cleaning during your stay
Nanny
Shopping on arrival
Aperitif / aperitif on arrival
Delivery service Events (Birthday, babyshower, decoration, catering…)
Wellness (Yoga classes, sports coach, massage, beautician…)
Home chef
Private driver between the accommodation and Ile de France
Activity booking (Accrobranche, horse riding)
Restaurant booking Concierge package available during your stay to answer all your requests.
The deposit is 1500 euros.

The name of the village has a very poetic meaning since Feuguerolles refers to the place where the ferns grow: the proximity of the beautiful surrounding forests gives this commune a very special charm and will give unforgettable memories during your holiday stay. Various Gallo-Roman artefacts (medals, statuettes, weapons axes, etc.) have been found in this village despite the violent fires of 1893 which destroyed part of the village. You can visit with your family or friends the church of Saint-Amand next to the castle park, built in the 11th century. Renovated in the 16th century, it has retained all the charm of the old village churches. A little history? Almost everyone knows the famous phrase of Henri IV, “rally to my white plume”. Henri IV was in the middle of a civil war against the Catholic League, which was fighting his power and refusing him entry to Paris. He uttered this sentence in the middle of the battle of Ivry on 15 March 1590, a decisive battle for him, because although outnumbered, Henri IV and his army completely defeated the Protestant army. But few people know that a few days before this battle, Henri slept here, at the château de Feuguerolles de Hellenvilliers, less than thirty kilometres from Ivry la Bataille. Henri IV was indeed lodged at the castle by one of his descendants, probably Gabriel de Hellenvilliers, lord of Villiers, baron of Chambray and Ferté-Fresnel, who appears in the archives of the BNF as a knight of the King’s Order, gentleman of his chamber, and captain of 50 men at arms. Come and stay with your family or friends in the castle of Feuguerolles de Hellenvilliers, a place full of history! 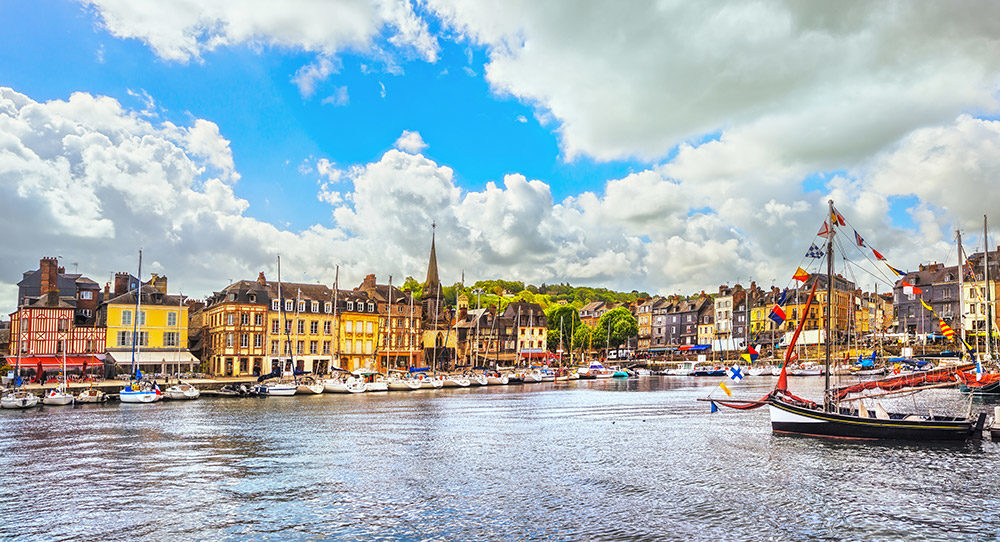 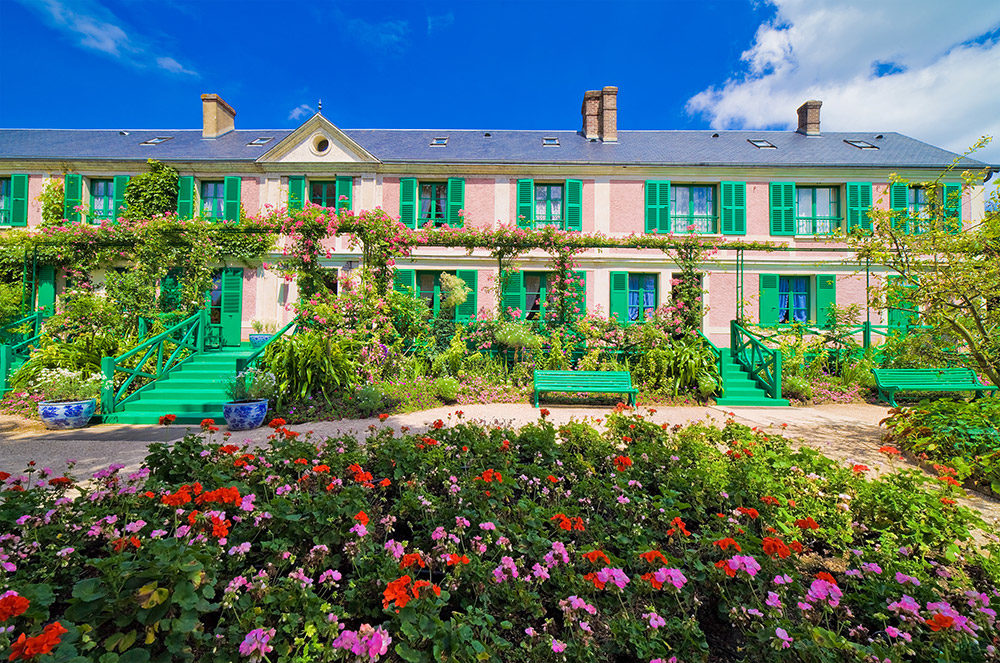 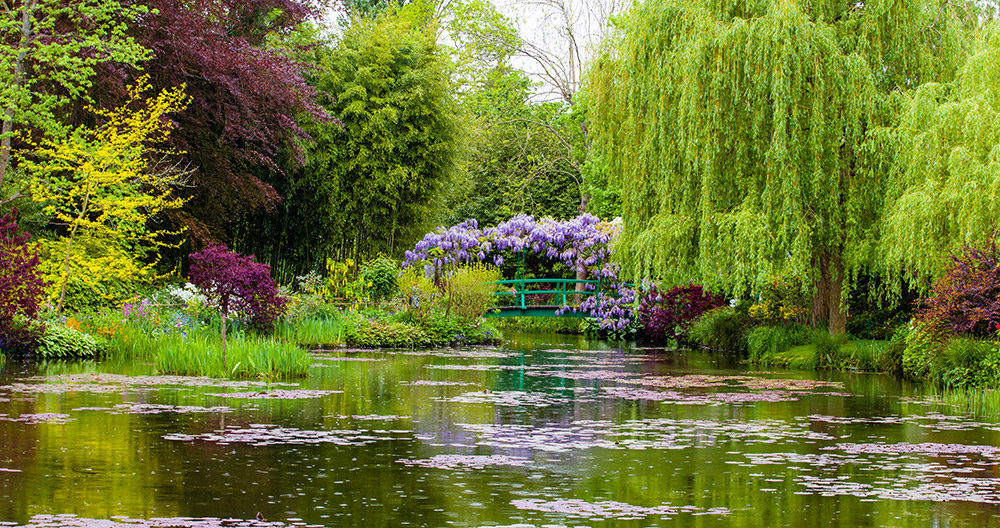 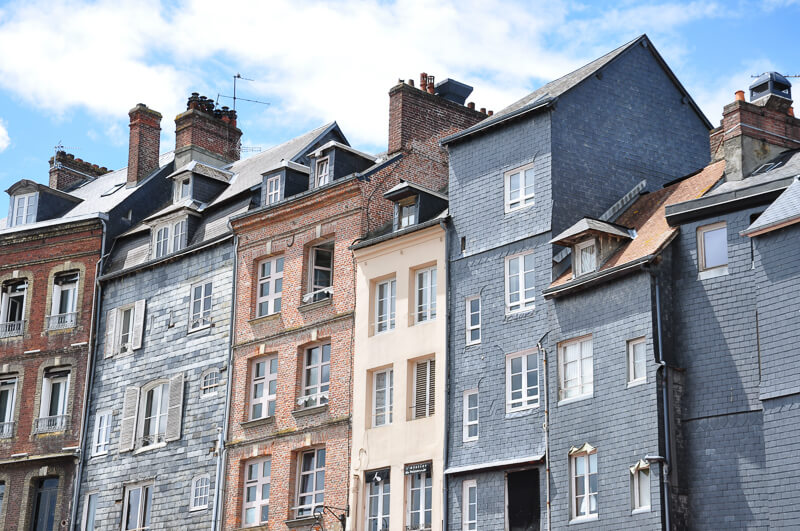 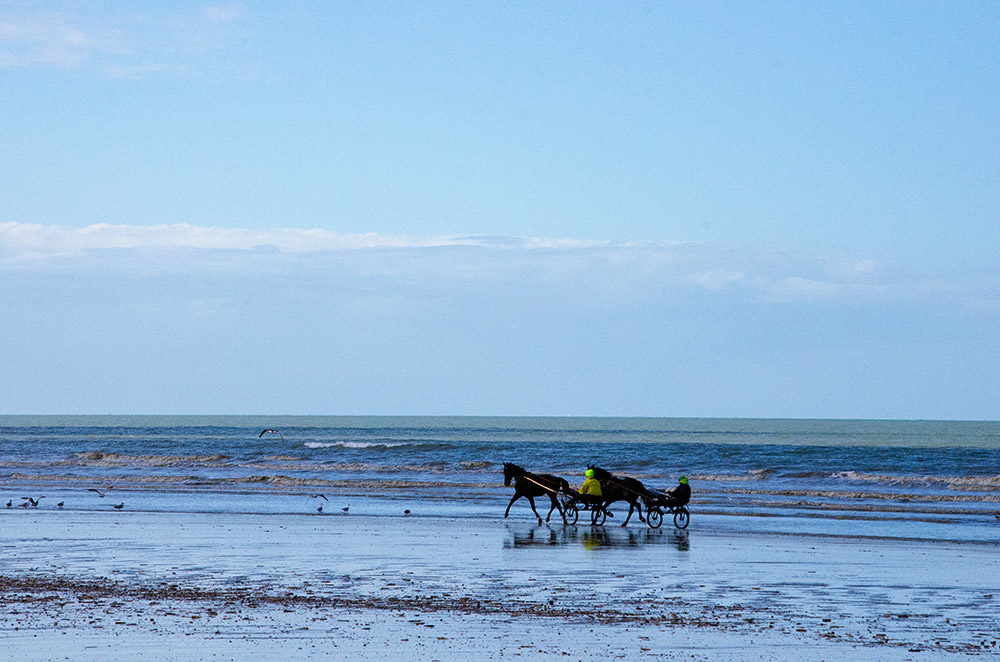 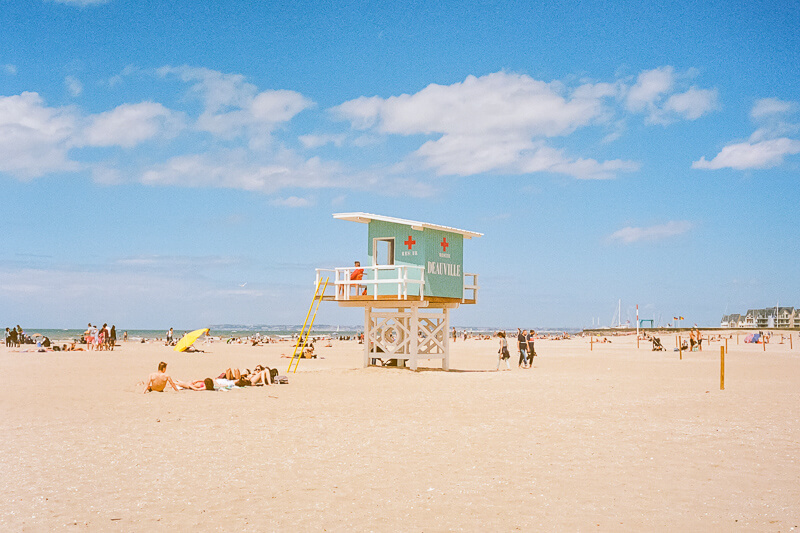 Normandy, the ideal place to recharge your batteries and reconnect with nature. If you are a culture buff: the Bec-Hellouin abbey, the old town of Evreux with its magnificent cathedral or Claude Monet’s house in Giverny are close to the castle. Take the opportunity to discover the world-famous Museum of Impressionism and its water garden, famous for having inspired the painter. In terms of nature, Normandy has a lot to offer: Take a walk along the greenway from Evreux to Bec-Hellouin, take a tour of the small village of Harcourt, or visit the castle of Champ de Bataille, which is located not far from the castle of Feuguerolles d’Hellenvilliers. You can also stroll around the medieval port of Honfleur or simply admire the view from the cliffs of Etretat. For the more sporty among you, you can opt for a canoeing trip, accrobranche or take advantage of the Evreux golf course. Normandy is the ideal playground for your holiday!